Taituarā member Simon Mutonhori is Group Manager Planning & Regulatory at Wairoa District Council. As winner of a Marsh Overseas Manager Exchange in 2021, he is currently travelling in the United States and partnered with a manager from Pearland City Council in Texas. In this first dispatch he shares some initial observations on the lie of the land and the way local government works there.

"On arrival I was picked up by Clay Pearson, the city manager, and escorted to my hotel. On the way I noticed extraordinarily wide high highways, some as wide as 12 lanes on extraordinarily flat land. Later, I found out that many things in America come in plus sizes, skyscrapers, houses, cars. burgers, and meal portions. The people are extraordinarily polite and nice, but some walk with guns publicly strapped on their belts! The land is flat with no sign of hills on the horizon in any direction. This and other geographical factors present a challenge to development in this city, a topic that I will examine in detail in my next blog." 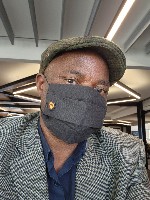 "On arrival at Pearland City Council, I was taken around and given a run down of the city's administration structure as well as of local and central government relationships. It is a complex maze of jurisdictions with a lot of overlaps. Firstly, there is the Federal Government, then there's the State Government, the County Council, and finally the City Council in order of hierarchy. Each of these has different jurisdictional boundaries with a lot of overlaps e.g. Pearland City belongs to three different County Councils, each with a slightly different way of doing things as well as their own taxation systems."

"On top of that there are other quasi-government entities such as the Drainage District, School District, Health District, Water Allocation Authority, Major Infrastructure Funding Board, and Emergency Management District. Councillors, citizens and senior staff represent Council in these entities. The funding of these entities comes from what is called property tax (like our rates) and sales tax (like our GST), plus occasionally funding by the Federal Government. Each of these is allocated a fraction of the rates and GST from their jurisdictions depending on services they provide to those relevant property owners."

"There are seven councillors including Mayor for a city of 130,000 people. The city is like a rectangle about 10km wide by 20km long, situated just south of Houston City. Council elections are staggered, and every year only two councillors are replaced in order to help provide continuity. The city population has increased by 150 per cent in the last 20 years, putting a huge pressure on infrastructure which the Council has done very well to keep up with. The city is in the hurricane region originating from the Gulf of Mexico and June to September is the hurricane season."

"I have attached a few photos for you, just to illustrate some of my initial observations." Overseas Manager Exchanges present opportunities to focus on management development. They also offer an ideal chance to share experiences and challenges with a host professional in another country with an different system of local government. We look forward to sharing more of Simon's experiences and reflections on local government in Texas soon.